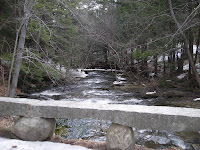 My husband grew up knowing Vaughan Woods as “Hobbit Land,” because of the miniature stone chairs and tables hidden throughout the woods. He has never been able to re-find and show me the Lilliputian seating arrangements--whether they were figments of his childhood imagination, dismantled to make fire rings, or spirited away by the elves I may never know. In any case, Vaughn Woods has such an enchanted feel, it’s not difficult to imagine sprites twinkling among the mossy tree trunks, gnomes patrolling the stone bridges and (cold-loving) dryads and nymphs bathing below the waterfall.

This privately-owned parcel is cooperatively managed by the Vaughan Homestead Foundation, the Gibson Family, the Kennebec Land Trust and local volunteers. Vaughan woods covers 166 acres, with a number of trails meandering through a mature hardwood forest, rambling across fields and crisscrossing Vaughan Brook on magnificent stone bridges. The piece de resistance, a large, arched granite bridge crosses a cascading Vaughan Brook just below the waterfall rushing down the face of an old granite block dam.

Getting ThereFrom Water Street in downtown Hallowell, take any of the cross streets west one block to Second Street. Turn left and follow Second to the stop sign at the intersection with Middle St. and the Hallowell-Litchfield Road. Just before the intersection there is a small parking area on your left (there is no sign to indicate you are at Vaughn Woods, but there is a small kiosk just inside the trees). Climb over a small stone wall or go under the gate to the right of the parking area.

The Trails
Vaughan Woods’ trails are un-named and un-marked, but well-worn so it is relatively easy to distinguish trail from non-trail. 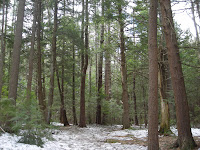 This is a wide, level trail, surfaced in mulch and leaf litter with long gradual ascents and descents. From the woods next to the parking area, the trail angles down to the left, skirts a small field and re-enters the woods. Once inside the woods, turn right. The trail crosses a series of small, arched stone bridges over small hillside drainages (keep your eyes open for the trolls that guard the bridges). Vaughan Brook is far below, on your left. The trail parallels the brook under a canopy of pine and mixed hardwood (American beech, white birch, red oak), slowly descending to water level. As the trail nears the level of the brook, you will see a large arched bridge ahead. The bridge crosses Vaughan Brook just below the holding pond. Stop a moment to enjoy the surge of the water rushing down the falls and cascading over rocks below.

Just beyond the bridge, the trail forks. Go either way; the trail loops back to this point. Taking the right fork, the trail ascends a long gradual hill through mixed hardwood and hemlock forest. In a grove of tall hemlocks, the trail levels out some and forks again. The right fork is a short spur that angles downhill to I-95. The left fork continues the gradual ascent. The trail levels out somewhat in a small opening in the trees and forks again. The right fork angles downhill a short distance to Hall-Dale High School. The left fork continues to climb gradually a short ways before it begins a somewhat steeper descent to a long, rolling field. It follows the field down hill, veering left, over a couple of undulations, and back into the woods. It crosses a small stream over a large slab of granite and rejoins the beginning of the loop at the fork. From here, retrace your steps across the bridge and along the ridge, through the small field and back to the parking area. 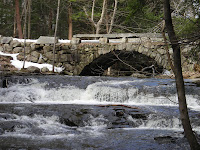 Other Trails
There are a number of ancillary trails that parallel Vaughan Brook and explore other parts of the woods, but they are closed right now due to erosion, bird nesting or are impassable with snow. I will return later in the summer for an update. 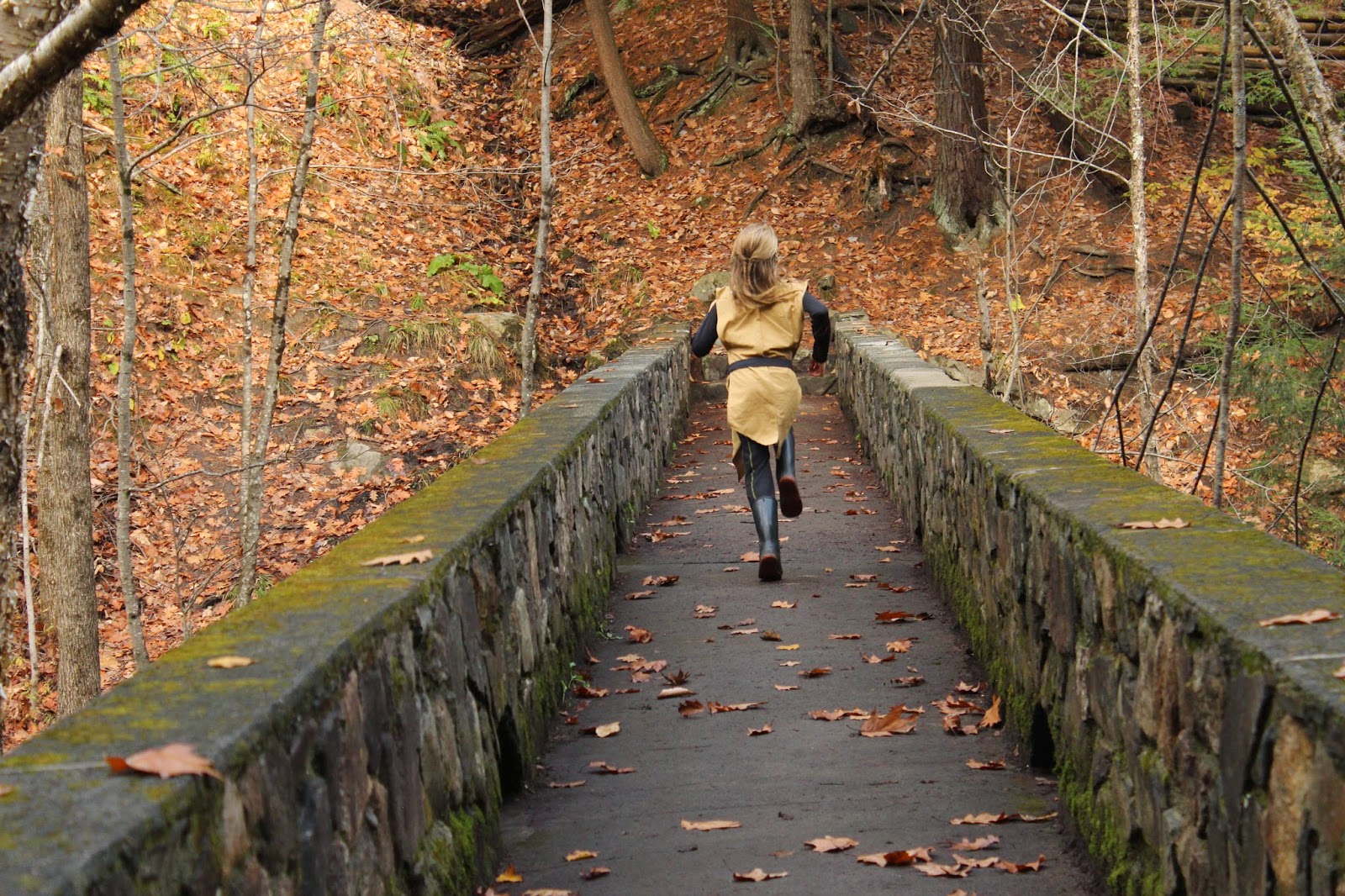 Kid-Friendly Factor
Vaughan Woods is one of my favorite places to take my kids. The broad, smooth trails work great with jogging strollers (even the double) and they could all manage most of the Main Loop by age two, and they could spend all day playing Pooh sticks at the bridge, or throwing rocks in the water below. For older children, the tall woods offer myriad opportunities for hide-and-seek and what better place than the enchanted Hobbit Land to build fairy houses? Keep in mind that some parts of the trails drop off rather steeply; the tragic accident last year, in which a middle-school child died as a result of injuries from a fall at Vaughn Woods should serves as a reminder for us to remain vigilant of our children, even in seemingly tame hiking locales.
Posted by Andrea at 6:29 AM

I grew up walking/running in the Vaughn Woods and the trails extend from Water Street/the Kennebec River all the way out to Smith Road and Litchfield Road. There was a white gate/posts on Litchfield Road back in the '70's. I walked the trail during hunting season one year and it is a magnificent trail, in the years since I become a landscape architect/land planner/park * trail planner I believe because of this childhold experience. One day soon I hope to photograph and expereince the trail once again. I hope the people of Maine preserve this area as it is a jewel of the region.

Are dogs allowed at Vaughn Woods?

Michelle--Yes, dogs are allowed (and abundant) at Vaughan Woods. Local ordinances and state regulations require dogs to be on a leash or under voice command. The managers of Vaughan Woods request that owners pick up dog waste. Happy Hiking!

Great place to walk/Hang out. I've been using "My Tracks" a google app to list all the trails. It's so nice to go walking especially in the Spring and late Fall. Great post!

Please contact us at Vaughan Woods & Historic Homestead regarding this blog's promotion of our trails. We have been having a lot of issues with misuse of the Woods and are attempting to find all non-official listings of it. We need your support in spreading the word about appropriate uses of the Woods. We can be reached at katetremblay@vaughanhomestead.org or 622-9831