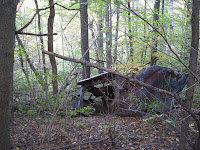 Calumet Park is a 27-acre park located on Northern Avenue in Augusta. Near the road, the park offers a playground, tennis and basketball courts, a ball field and, in winter, an ice skating rink. A wooded area extends downhill behind the field. Although the Augusta City Park literature describes the park as having trails, it's really more of a glorified bushwack through the woods. An older man who lives near the park told me that when his children were young, they used to be able to follow the trails all the way to an ice cream stand on Mt. Vernon Avenue.

Getting There
From Downtown Augusta, take Northern Avenue (Route 104) north about 0.6 miles. Calumet Park is on the left at the top of the hill. 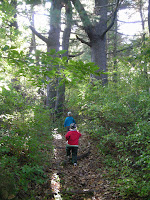 The trail begins in the far north corner of the ball field, heads straight into the woods and angles downhill behind houses. The trail passes under power lines and angles left, heading down steeply into a gully under a canopy of very tall pines and mixed hardwood species. The trail dead ends a few hundred feet down the hill. Retracing the trail back up hill, just past the powerlines the trail forks to the right and parallels the field. Here the trail becomes very overgrown with vegetation as it passes through a boulder field and an area full of old junk and a very old rusty car. The trail angles downhill to the right and dead-ends again. Backtracking uphill again, the trail heads straight out toward the south corner of the park and comes out in the short alley/driveway south of the park.

Kid-Friendly Factor
This is a nice short hike for little ones, if you don't mind the adventure of dead-ends and a little bit of steep ups and downs. My kids especially enjoyed seeing the rusty old car. The playground and field offer extra enticement to reluctant walkers.
Posted by Andrea at 8:25 AM No comments: 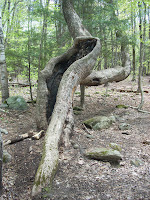 The Mount Pisgah Community Conservation Area is a 94-acre conservation property owned by the town of Winthrop and part of the Kennebec Land Trust's 700-acre Mt. Pisgah Conservation Area. The Trail ascends the west slope of Mt. Pisgah, through a lovely and peaceful mixed hardwood forest, to the fire tower at the top of the mountain, and loops back to the parking lot via the old fire tower road.

Getting There
From Augusta, take Route 202 (Western Ave.) west toward Monmouth. Where Route 132 intersects 202, heading south toward Monmouth Village, turn left onto Blaisdell Rd. At the stop sign, turn right onto Wilson Pond Road (the road name is not marked at this intersection). At the stop sign, turn left onto Pisgah Road. In about 1.7 miles, a small parking area on your right marks the start of the trail.

From the parking lot, head up the fire road to where a large gate blocks the road. Just left of the gate, a sign reads “Mt. Pisgah Trail,” and a box mounted on a post holds a sign-in sheet and maps. Follow this trail, a narrow, somewhat rocky dirt track through a mixed hardwood forest. As you climb the gently-sloping trail, you move into an area of very big old hardwoods, and, farther along, the tree community includes many golden yellow birches, with very few coniferous trees. The understory is fairly open, dotted with many large boulders and the canopy is filled with bird song in the spring. Along the trail numerous The trail crosses through many wet, boggy areas with the aid of stepping stones and bog bridges. A large pile of split logs about halfway up the trail indicate that more bog bridge will be added soon. Nearing the top of the mountain, the trail enters a grove of old pine trees and levels off somewhat. In the pines, the trail crosses another dirt track; continue straight ahead and up a rocky incline to the top of the mountain. Here a 60 foot fire tower offers views of the surrounding hills and peaks. At the foot of the tower, a grassy patch provides the perfect spot for a picnic. 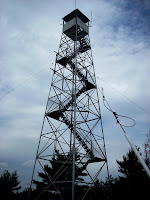 Take the same rocky trail back downhill a few hundred yards to where the trail you ascended curves to the right. Take a left fork here, near a gray post with no sign, to head down to the parking lot via the old fire road; a quicker and more direct, if somewhat less picturesque route than the one you ascended. 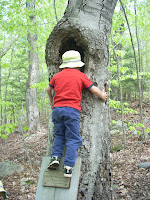 The Mt. Pisgah trail is a challenging hike for small ones. Having a destination (a mountain top!) and the more direct descent trail helps. I told my four-year-olds the fire tower wasn't open, to avoid a heart-racing climb up the open stairs. However, a much older child would enjoy the adventure of climbing the tower and checking out the views. The trail is definitely not stroller friendly, but isn't too long of a climb for toting the littlest passengers in a backpack or sling.
Getting Involved
The town of Winthrop and the Kennebec Land Trust jointly manage and maintain the Mt. Pisgah Community Conservation Area. Visit http://www.tklt.org/ to join the Kennebec Land Trust or learn about volunteer opportunities.
Posted by Andrea at 5:38 AM No comments:

The Old Narrow Gauge Trail follows the rail bed of the former Kennebec Central Railroad, a narrow gauge rail line that transported passengers, coal and supplies to the National Veterans Home at Togus (now USVA Togus) from 1890 through 1929. The original rail line traveled five miles from Randolph to Togus. The first 1 ¼ miles of the original rail line lie within Randolph and the town owns a right-of-way to this section, which comprises the trail. An Eagle Scout built the trail in 1985, but the trail was not maintained and fell into disrepair. A committee formed in 2003 to improve and upgrade a more permanent trail. The trail committee plans to eventually continue the trail the entire five miles to Togus and link the trail to the Gardiner end of the Kennebec River Rail Trail using directional signs. The trail is accessible by foot and bicycle (no motorized vehicles), and by ski or snowshoe in winter. 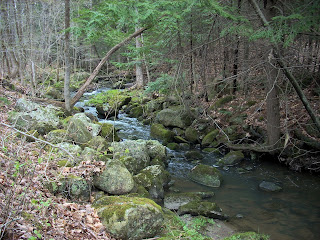 Getting There
From the East side of Augusta, take Route 9 (Hospital Street) south to Randolph. Continue straight (Route 27 South) at the light 0.3 miles. The trail begins just , A large kiosk marks the trailhead across a driveway and strip of grass south of the south of Goggin’s IGA. The IGA parking lot is posted with signs saying the parking is for IGA customers only, but Webb’s gas station across the street is not posted. The trail can also be accessed along Route 226: from Randolph, take 226 east ½ mile; a crosswalk and green pedestrian sign mark where the trail crosses the road; the road shoulders are wide enough here for parking.

Because the Old Narrow Gauge Volunteer Trail follows the path of a former rail line, it is a relatively wide, level path with not much in the way of ups and downs except where the trail dips in and out of the streambed at numerous stream crossings. 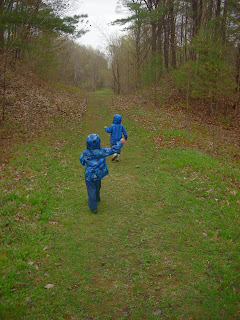 From the kiosk south of IGA, the trail passes a small pond on the left and follows the course of Little Togus Stream, a sweet little brook that tumbles along over mossy stones. This first section of trail is an easy walk over a wide, level swath of mown grass and gravel. Beware of the trail edges; poison ivy grows in thick masses along this section of the trail. About halfway between 126 and 226, the trail crosses over the stream via a large culvert. Just past the culvert a picnic table is nestled into a wide area next to the trail. In just under half a mile the trail reaches Route 226 (Windsor St.), crosses at a crosswalk and heads back into the woods. From here on the becomes a dirt track, with some rutted sections and numerous reroutes around former railroad bridges. At the same time, the trail becomes increasingly peaceful and remote. As you leave the road noise behind, bird song becomes more apparent and the forest grows denser, with tall willows, oaks and hemlocks filling out the canopy and lush ferns lining the stream banks. A few hundred yards beyond the road, the trail crosses the stream again. It appears a bridge is under construction here; two metal I-beams span the water, mounted on old concrete supports, and a seemingly temporary log and two-by-four bridge crosses between them. Shortly after the bridge, the trail passes a homemade sign marked, “Apple Tree Lane,” and goes through an area dotted with wild apple trees before moving into deep dark woods of tall pine and hemlock trees. In the woods it crosses a small side stream on a dilapidated plank bridge and re-crosses the main stream again on stepping stones. 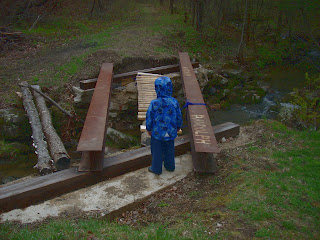 The trail comes to a crossroads with what appears to be a well-used ATV trail. A wooden sign indicates that a left turn will take you to Deb’s Ice Cream and Route 27 and a right turn leads to the Birmingham Road. The trail comes out into a more open area, skirting to the right of a meander in the stream and then becomes narrower, more of a foot track than an ATV trail. Again the trail crosses the stream, this time on a board bridge, and heads back into the deep woods. Another wooden sign indicates “Iron Bridge X” along with a painted railroad crossing symbol on the tree below just before two strips of iron cross the stream where it is channeled through a narrow concrete sluice. In a short distance the trail comes to another stepping stone stream crossing, this one labeled “Whitetail X.” The trail follows along the left of a small meadow labeled “Beaver Swamp Bend” and then comes to “One Step Bridge,” a collection of small logs bolted together that take two or three steps to cross. The trail then crosses a wet area on some logs, this crossing labeled “Tan House Xing,” due to the tan house just visible through the woods to the right. In a short distance the trail crosses a gravel road and resumes in the woods, leaving the path of Little Togus Stream and becoming a wider, somewhat eroded ATV track. A short distance into the woods the last of the wooden signs indicates “Hankerson Rd. 1 mi.” This is approximately the boundary of Randolph and Chelsea, and the end of the official trail, however trail continues along, meeting the Hankerson Road just west of the Collins Road. A dirt road/four-wheeler trail begins across the Hankerson Road; an especially adventurous hiker could attempt to follow this track an additional two miles or so to Togus.

Kid-Friendly Factor
The first section of the trail (just under ½ mile) is wide and level enough for pushing a jogging stroller, and this fairly easy section trail is inviting for small legs and a pleasant walk for parents, but be sure to teach children to recognize and avoid poison ivy, or stay out of the bushes along the trail altogether, no matter how tempting the blackberries that also grow there in late summer may be. Beyond 226 the trail is too rutted and bumpy to accommodate a stroller; the many sketchy stream crossings make it impassible for strolling, and should only be attempted by those fleet of foot and willing to get wet--older children may enjoy the challenge, but little ones (and their parents) may get frustrated by having to be lifted across repeatedly. 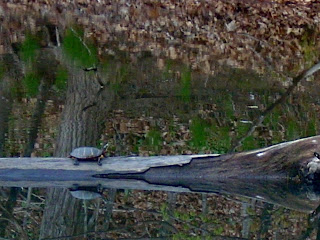 Getting Involved
For more information about the history of the Kennebec Central Railroad and the Old Narrow Gauge Volunteer Trail, or to get involved with trail maintenance or donations, go to http://www.oldnarrowgaugetrail.org/. 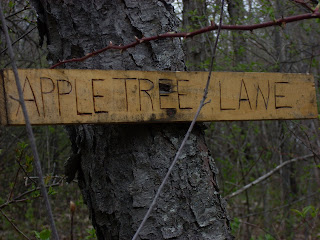 Posted by Andrea at 6:19 AM No comments: