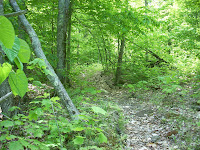 The Allen-Whitney Memorial Forest is a 708-acre plot of land owned and managed by the New England Forestry Foundation. A network of trails provides access to the forest for non-motorized uses, including cross-country skiing, snowshoeing, hiking and horseback riding. The trails are clearly intended more for winter use than summer; they are fairly overgrown with vegetation and the blazes are few and far between in some areas. However, the forest provides a peaceful and shady hike through varied terrain and vegetation types, with birds singing in the canopy above and wildflowers growing all along the trails. It is worth a bit of bushwhacking to experience the beauty of the forest.

Getting There
Take route 202 (Western Avenue) west into Manchester. Turn right on Route 17 and go 1.6 miles. Just past Lakeside Orchards, turn right onto the Worthing Road, follow it to the end (about 1 mile) and turn right onto Scribner Hill Road. Park at the Manchester Meeting House, about 0.2 miles down the road on your left.

The Trails
All of the trails begin at the kiosk at the back end of the parking area. There are no maps available at the kiosk, but you can download a map of the trail network from the Manchester town website. Unfortunately the map is not color-coded to match the trail blazes and not all of the cross-trails appear on the map. However with a little careful attention to the blazes and a willingness to get a little turned around, it's not too difficult to navigate the trails. In general, the red trail is marked as 1 on the map; the blue trail is 2, 3 and 4 and the orange trail is 5. 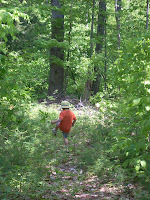 From the kiosk head straight into the woods along a wide, grassy road. In a few dozen yards, the trail T's, with a red arrow pointing left (a right turn leads back down to Scribner Hill south of the Meeting House). Follow the red trail left, uphill through a pine and mixed hardwood forest. The trail here appears to be an old road, overgrown with grass and plants. The trail crests a hill and a blue arrow points left where Allen's Trace begins. Continue straight downhill, passing another left fork marked with an orange arrow (Lion's Leap). The trail travels through a wet area and takes a left turn uphill (look for double red blazes). The trail continues uphill following a narrow path. After passing a granite ledge on the left, the trail angles left and uphill, becoming very indistinct. At a stone wall, the trail crosses an old road and gets somewhat lost in the woods, looping up and downhill before returning to the road. To avoid this confusion, turn left onto the road and follow it until the red blazes resume. The road curves left and steeply uphill before heading back downhill. The blue trail forks right and straight ahead and the red blazes end. Follow the blue trail straight ahead for a short distance and the red trail resumes to the left, uphill and traverses Allen hill along a snowmobile trail. At a T intersection, turn right and follow the red trail back down to the parking area. 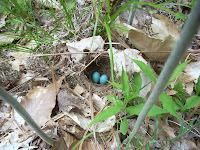 From the kiosk head straight into the woods along a wide, grassy road. In a few dozen yards, the trail T's, with a red arrow pointing left (a right turn leads back down to Scribner Hill south of the Meeting House). Follow the red trail left, uphill through a pine and mixed hardwood forest. The trail here appears to be an old road, overgrown with grass and plants. At the crest of a hill turn left at the blue arrow. The trail moves uphill through a stand of tall, straight red pines. The trail is fairly indistinct, with tall ferns growing in it. The trail crosses an old road and enters a mixed hardwood forest with some very large old maples. After the second large tree on the right, turn right at the blue arrow, and climb a hill through more red pines. There's not much of a trail here, just widely spaced blue blazes and weedy ground.

The trail moves into a denser stand of trees and comes to a T intersection, both directions marked with blue arrows. Turn left here (a right turn will lead toward Lion's Leap and the east side of the Whitney Way loop and can be followed in reverse of these directions) onto an old road. The trail crosses a snowmobile trail and heads gradually downhill into another pine stand before heading more steeply down into a denser mixed hardwood forest. The trail curves toward the left, opens into a wider tote road and comes to another blue arrow pointing right (Scribner Hill Road is visible to the the left). Turn right, following a snowmobile trail 100 yards or so to a tree in the middle of the road marked with a blue arrow pointing left. Turn left and follow an old road over level ground through beech and maple woods. The trail passes numerous spots that look like side trails—ignore these.

The trail comes to an intersection with a small trail entering from the left; follow the blue arrow right and pass through a wet area on the trail. Cross a small stream on good-sized rocks and climb uphill. The trail crosses another stone wall, levels out and passes some large hemlock and pine trees, following a seasonal stream bed on the right. The trail crosses another stone wall and meets a snowmobile trail, turning right at the blue arrow. The trail through here is quite eroded and wet, clearly becoming a stream during spring runoff and heavy rainfall. The trail turns left, climbs uphill and comes to another T intersection, with red to the left and blue to the right. Follow the blue trail downhill to a junction with a snowmobile trail with a red arrow again to the left. Go right here and almost immediately turn left at the blue blazes, heading downhill and left again at another blue arrow. The trail becomes narrow and weedy again and passes through an area of very low-hanging trees. The trail comes to a T intersection again; turn left and head downhill. At a fork in the trail, an orange arrow points left (to Lion's Leap) and a blue arrow points right. Following the blue trail a few yards downhill, the trail forks again, with the left (straight) fork returning to the parking area, the right heading back up the blue loop. 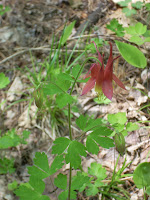 Lion's Trace is a short connector trail that links Whitney Way and Allen's Trace Trails. To access Lion's Leap, follow Allen's Trace (the blue trail, above) to a fork marked by an orange arrow pointing right. From here, head downhill along a trail abloom with lily of the valley and red columbine (in early June) under a tall hardwood canopy and past a large old oak tree. The trail is marked alternately with orange blazes and orange surveyor's tape. It is also a narrow dirt track, unlike the other two trails which mostly follow old road beds. The trail curves left, crosses an old stone wall and heads downhill very steeply, leveling out in a hemlock grove where it meets Whitney Way at a T intersection marked with red arrows both ways. A left turn climbs Allen Hill and a right turn leads back down to the parking area. 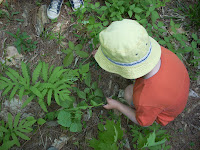 I took my four-year-olds on Whitney Way and they were both very put out by the “pokeys”--the vegetation covering much of the trail, as well as the distance. They're both strong hikers, but without diversions such as streams or ponds for throwing rocks into or big boulders to climb and jump off, it was just drudgery to them. Older children might appreciate the subtleties of the deep woods and quiet bird song more, but I know I enjoyed it much more when I went back and hiked Allen's Trace and Lion's Leap without small children.

Getting Involved
To find out how you can get involved in maintaining the trail network at Allen-Whitney Memorial Forest, contact the Manchester Conservation Commission.
Posted by Andrea at 7:54 AM 2 comments: