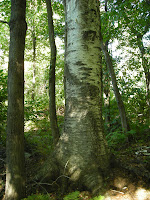 Savage Park is a surprisingly verdant and wild seven-acre parcel of land directly adjacent to the new Route 3 bridge on the east side of the Kennebec River. I’m sad to see the somewhat neglected condition of the park’s trails, which were one of the projects I worked on as the team leader of a group of teenage workers in the Maine Conservation Corps when I first moved to the area many years ago. Though the trails are somewhat overgrown and bridges dilapidated, it is still worth exploring Savage Park’s quiet woods.

Getting There
Savage Park is located on Riverside Drive north of Cony Circle, on the left, just past the intersection with Route 3. A small semi-circle driveway offers ample parking.

From the parking area, cross the large tree-dotted field and pass a row of birches enclosing the covered picnic area. From here follow the wide grassy path into the woods, where the path narrows to a dirt track. Under a canopy of mixed hardwood trees (aspen, beech, birch, maple and oak) interspersed with white pine, the trail heads west to a T-intersection at the top of a small bank. The right-hand fork follows the bank a short distance, and then arcs right, back toward the entrance, meeting the wide grassy path just beyond a grove of staghorn sumac (just before it turns back toward the entrance, it appears to angle down into the pine trees, but then peters out). A few yards past the intersection, the left fork comes to a set of log steps down the bank on the right. Heading down the stairs, the trail crosses a wooden bridge over a small stream, which is dry now in early September. Several of the bridge’s boards are broken or missing. The trail climbs another set of log steps up the opposite bank. This bank and the rest of the trail to the river grows thick with poison ivy, so watch your step. The trail descends another small set of steps and opens out onto the railroad tracks just above the Kennebec River. Head south (toward the Rt. 3 bridge) along the tracks about 100 yards to where some brownish rock ledge is exposed along the bank to your left. Near the far (south) end of this ledge, the trail resumes, unmarked. From here the trail climbs back up through the trees, and comes to a small stream crossing near one of the biggest white birches I have seen. From the birch tree, the track fades away a bit into some brushy undergrowth for a few yards before meeting back up with the obvious trail. A right turn here will lead you in an arc back toward the far end of the picnic area and a left turn will take you back past the original set of steps and to the T-intersection.

Kid-Friendly Factor
Savage Park would not be my first choice for taking small children on a hike. The narrow and overgrown trails and stairs make it impassible for strollers, and the hazards of broken bridges, poison ivy and broken glass and rusty metal along the train tracks make it less than desirable as a place to allow little ones freedom to explore. It would be a nice short but interesting hike for an older child with more predictable hiking skills and the ability to detect and avoid poison ivy. The big field and covered picnic area might make the park a good spot for a birthday party or play group.
Posted by Andrea at 1:35 PM 1 comment: