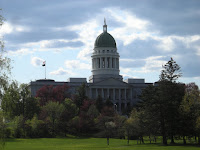 What better place to start a guide to walks in Maine’s capital than at Capitol Park? Situated between the Statehouse and the Kennebec River, Capitol Park is a lovely 20-acre parcel of lawns and trees, offering visitors an impressive view of Maine’s verdigris-domed house of governance. Capitol Park was the first piece of land consciously set aside for public use in Maine. With amazing foresight, Maine’s early government established the park along with the grounds for the Capitol in 1827, when Augusta was established as the seat of governance. According to the state’s website, the park was fenced off from cattle and planted with trees for the purpose of creating a “dignified setting” for viewing the Capitol. Over the years Capitol Park has served many, varied purposes, including camp site and parade ground during the Civil War and leased farmland after the war. The park was restored in 1878 and in 1920 the Governor commissioned the firm of Frederick Law Olmstead, the landscape architect best known for designing New York’s Central Park, to create a plan for the park and surrounding grounds. 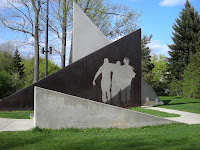 Today Capitol Park is indeed a dignified setting for viewing the Capitol, as well as a peaceful escape from the traffic of State Street and the bustle of activity surrounding the Statehouse. Stately oaks, beeches and pines shade quiet pathways and benches and tables offer numerous spots for picnicking or quiet contemplation. The Vietnam Veteran’s Memorial, dedicated in 1985, presides over the northern edge of the park, near Capitol Street, its overlapping wedges of concrete and bronze with cut-out silhouettes of three soldiers providing a haunting tribute to those who served. Other memorials in the park include a granite block dedicated to the victims of 9/11 and an obelisk-topped mausoleum in the northeast corner.


You can access the Kennebec River Rail Trail from Capitol Park via its municipal sister, Capital Park, across Union Street, where the YMCA and ball fields are located.

Getting There
Capitol Park is located on the west side of Augusta, directly across State Street from the Capitol. Parking is available along Capitol and Union Streets, and in the visitor parking lots near the Statehouse and State Library/ Museum/ Archives building.

Visitors can stroll casually along the broad gravel paths that wind around Capitol Park, or break free from the designated avenues and ramble over grassy expanses to explore the trees and monuments nestled throughout the park, or view the Kennebec River from the park’s easternmost edge.

Kid-friendly Factor
Capitol Park is a great place to take kids. The level, gravel paths work well for strollers (those with somewhat more substantial wheels than mall strollers) and are easy for kids to walk on, but the real draw for kids will be the big lawns for them to run around on. The trees and shrubs along the eastern end of the park also offer great hide-and-seek potential. 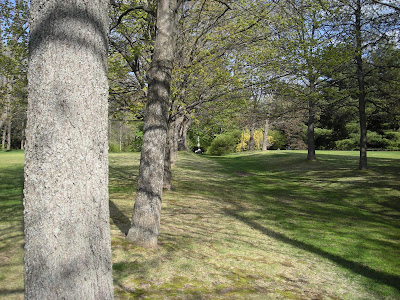 Dog friendly on a leash makes it a great place to walk Fido! As always clean up after your pup. Garbage cans available at two places in the park.